How To Correctly Measure Penis Size

How To Correctly Measure Penis Size

When a person is looking to start to enlarge his penis, it’s important to have an initial baseline set of measurements in order to more accurately determine just how much larger the penis is getting with the products being used to increase its size. These measurements should be carefully done.

How to Measure the Flaccid State

In the flaccid state, to correctly measure the penis, a person should take a soft, plastic coated tape measure, not a flexible metal one, and extend the tape measure about six to eight inches. The tip of the flaccid penis should be extended forwards and perpendicular to the floor. The tape measure needs to be put along side of the penis, not either on top of it or below it. A side measurement will be more accurate.

The person needs to note where the tip of the penis meets the tape measure in the front and where the tape measure rests against the base of the pubic bone at the back. The average flaccid measurement should be under six inches. It’s important to hold the tape measure stiff and taut, then simply glance downwards to see the number of inches of the exact length. Write this down as soon as possible so it’s not mixed up or forgotten.

It’s also essential that the penis girth or circumference is measured accurately. Take the same tape measure and wrap it around the middle and widest part of the flaccid penis. Do this twice for the most accurate results. Then write this measurement down as well as soon as possible. 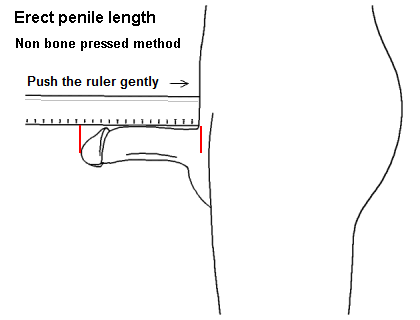 How to Measure the Erect State

Measurements in the erect state are considered more important to most men, but the measurement technique is very similar. Take a flexible, soft tape measure and extend it about twelve inches just to get a good, solid length open wide. The penis has to be in a fully erect state here, not in a partially erect one. With one hand holding the penis, take the tape measure and position it at the side of the penis. Don’t try to measure it across the bottom or top of the penis as inaccurate measurements may result.

Hold the penis firmly without ever trying to stretch it. Then set the bottom of the extended tape measure length against the nub of the pubic bone. Stretch the tape measure tip out to the head of the erect penis. Hold the tape measure there along the side and take two readings, one on each side, just to be certain you’re getting the most accurate measurement possible. Quickly write down the measurement so it’s not forgotten.

Since every man’s penis size is different when erect, it’s important not to try to imagine that it’s larger than it actually measures just to try to demonstrate a bigger size. This erect measurement is for each individual for himself alone. Nobody else has to see it at this point. In a short time, with the right enlargement device, the penis will definitely grow longer in its erect state, so there’s no reason to feel any embarrassment at this early point.

The erect circumference or girth also needs to be measured at this early stage. Take the tape measure and firmly but not too tightly wrap it around the widest mid section of the penis. Take this measurement two to three times just to be the most precise with it that it can possibly be, then record it down on paper.

Once a baseline measurement has been set, it’s essential to keep accurate measurement records from before, during and after the penis enlargement activities that will be involved in achieving more impressive length and girth. As the penis enlargement device is used more and more often, individuals will quickly see dramatic improvements in both length and girth of both the flaccid and erect states. They should take regular measurements of at least once or twice per week the same way as described above for the pre-enlargement states. These detailed records of positive growth will make the individual feel proud and that he’s really accomplished something significant and important to his psychological state of mind.

Once the product starts to be used, it should be used according to its instructions. Try not to deviate from how it’s supposed to be used when the goal is to obtain the largest growth results possible. Continuation of penis enlargement techniques with the product should be maintained at the maximum growth potential. Then at the end of three months, final measurements need to be made to see just how successful the overall results have been. The aforementioned tape measure methods should continue to be utilized to determine the specific increases in inches that the person will be able to both fully see and feel.

Added to wishlistRemoved from wishlist 4